The Circassian Nation’s Extermination War Committed by the  Russian Empire 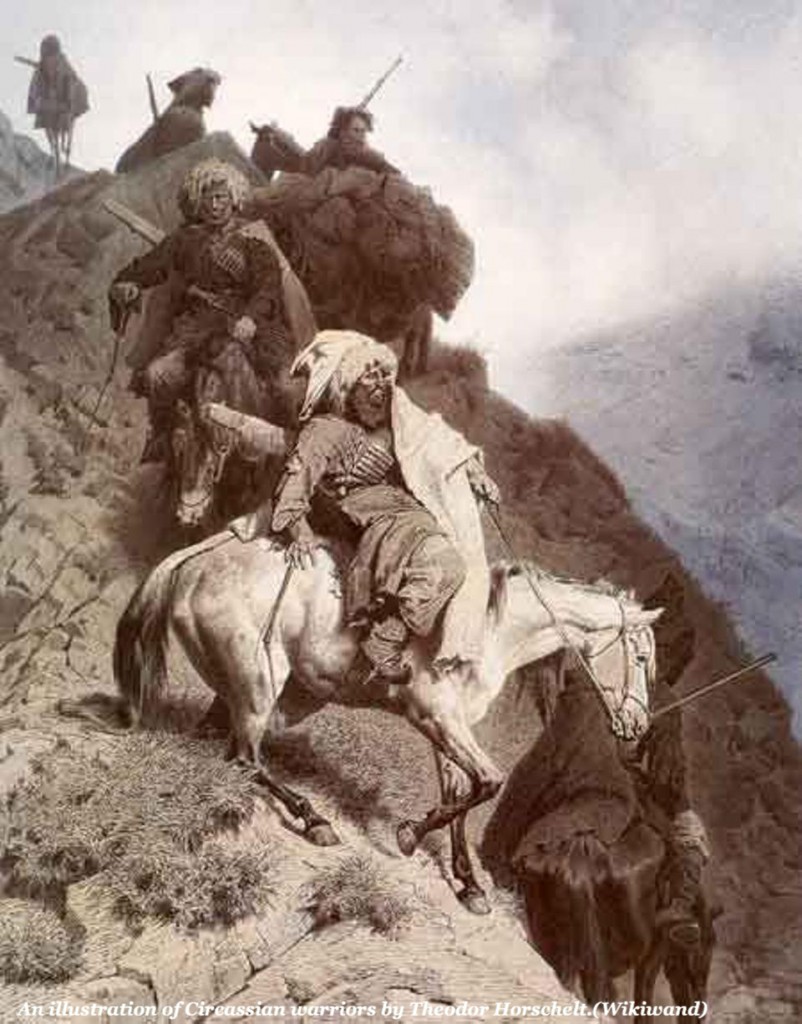 During this month, which marks the 156th anniversary of the end of the Russian–Circassian War on May 21, and in the midst of the spread of COVID-19 Corona Virus pandemic in the world, it is indispensable that we ought to  recall the Circassian tragedy.

Although it is quite correct to describe the genocide that was committed against  the Circassian nation in the nineteenth century according to the definition of  those heinous acts, according to the Convention on the Prevention and Punishment of the Crime of Genocide, which was adopted and offered for signature,  ratification, or accession by UN General Assembly Resolution 260 A (III) Dated on 9 December 1948, and the date of entry into force: 12 January 1951, in accordance with the provisions of Article 13, [1]  nevertheless the nature of this heinous and brutal genocide requires giving more accurate description of these crimes, which are acts of unspeakable cruelty committed against humanity.

What gives glimmers of hope is that all those accused of crimes against  humanity will be exposed, where victims will be consoled and compensated, as there are more people of good conscience, who care to set the record straight, which facilitates the deciphering clues and signs, and the realization of rights.

“The concept of genocide hardly covers the ruthless murder carried out by   totalitarian states. It does not even account for most of those wiped out by   the Nazis. A new concept is needed that covers the extent and variety of   megamurders by these mortacracies.” [2] Where the term mortacracy is   used for “a regime that commits mass democide.” [3]

The extent of the differences and similarities between democide and genocide  of the regime can be clarified.“ As defined, elaborated, and qualified in   Chapter 2 of Death By Government,  democide is any murder by government–by officials acting under the authority of government. That is, they act according to explicit or implicit government policy or with the implicit or explicit approval of the highest officials. Such was the burying alive of Chinese civilians by  Japanese soldiers, the shooting of hostages by German soldiers, the starving to  death of Ukrainians by communist cadre, or the burning alive of Japanese  civilians  purposely fire–bombed from the air by American airmen.” [4]

When taking into account of what happened regarding the occupation of the  homeland, genocide, ethnic cleansing and forced deportation of the Circassian  nation, and the role of the Russian Empire, led by the emperors themselves in   addition to senior officials in the Russian government, the democide description is quite fair and accurate. A scholar has published that the “Governments have murdered hundreds of millions of their citizens and those under their control.  The questions are, then, how is this democide defined, is genocide included,   how many have been killed, how do we find this out, and what sources can be  used?” [5]

The scholar decided to define the prominent titles, while considering democide, being the highest degree, fourth in sequence of brutality and annihilation,  which applies to what the  Circassians had to suffer, as per the following:

— “Genocide: among other things, the killing of people by a government because of their indelible group membership (race, ethnicity, religion, language).

— Politicide: the murder of any person or people by a government because of  their politics or for political purposes.

— Mass Murder: the indiscriminate killing of any person or people by a  government.

— Democide: The murder of any person or people by a government, including  genocide, politicide, and mass murder.” [6]

The hostile policies continued for decades, from then to the present day. The  Circassian situation froze and consequently the Circassian Question, was not  resolved by peaceful and legal means due to the failure of successive Russian  regimes to do so. The main intention and purpose was to adopt colonial and  assimilation measures in a multi ethnic crucible. By neglecting the role of  Diaspora Circassians as such, it gives an indication of creating cases of confusion in order to reject restitution  of the confiscated rights to those who seek  repatriation to their homeland, at the same time that the Russian authorities  ignore and deny all the legitimate rights, which are not governed by statute of  limitations.

No matter how long it might take, “the key to success is to focus on goals, not obstacles.” [7]

This entry was posted in 1864, genocide, krasnaya, krasnayapolyana, polyana. Bookmark the permalink.